The story of the Artisan is also the story of the Farmer. Many artisans take up their craft in the lean agricultural season. Sadly, craft as a means of livelihood has failed to sustain the makers.

The Farmers’ Calendar is a visual depiction of a year in the life of a farmer in Odisha. The painting is on a radial grid of 12 months of the year. The concentric layers depict the culture and festvals of the farmer alongwith the simultaneous activity that occurs during that period in the fields. There have been several versions of the Calendar, meticulously painted by different teams of Artisans over the last few years. Each version has resulted after extended discussions on content, colour and composition; and the artisans have enthusiastically put forth their ideas, each time. 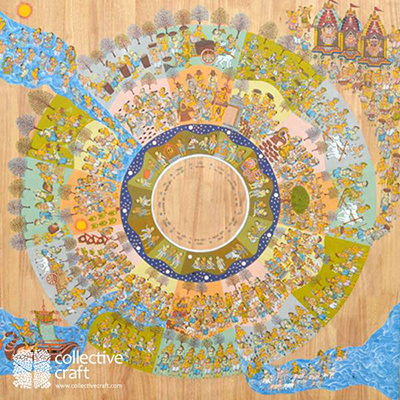 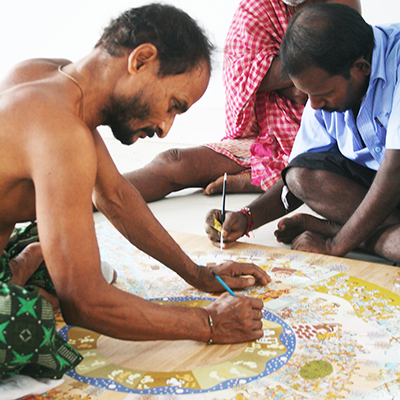 Each Patachitra painting is done by a team of artisans, called Chitrakars. Usually a master artisan, draws up the pencil sketches composing each frame carefully. base colours are filled in followed by details in several sessions. The ornaments and the black oulines are done at the end with a very fine brush

The narrative begins with the Amabasya (New Moon) followed by the Purnima (Full Moon). The Odia Calendar is the one put forth by the Jagannath Temple in Puri – a Lunisolar calendar that marks the phases of the moon, and some significant religious or cultural occasion mapped to it. The next circle in the Calendar marks important festivals followed by the farming activity.